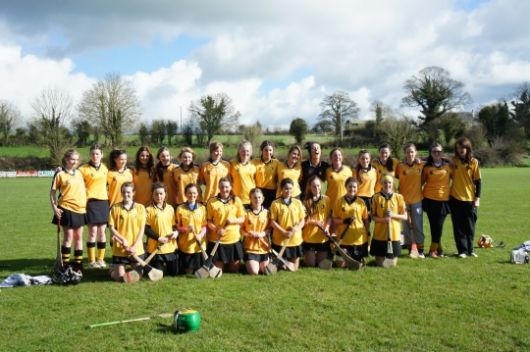 Congratulations to Coláiste Íosagáin following their wonderful 3-7 to 0-4 win in the All-Ireland Colleges final over St. Mary's of Macroom.

Well done to Ciarán O Murchú and his U19 camogie team at Coláiste Íosagáin on a thrilling display of camogie at the All Ireland Colleges Senior D Championship at the Ragg in Thurles on Sunday, 4th March 2012.  Girls on the team come from a number of clubs in Dulbin - Ballinteer St. John's, Ballyboden St. Endas', Cuala, Foxrock, Kilmacud Crokes and St. Vincents.

It was a very cold but dry and bright day for this encounter and with the wind at their backs for the first half Colaiste Iosagain got on the scoreboard within 3 minutes of the starting whistle.  They battled hard and used every advantage they had in the first half and just before the whisle went for half time Anneka Kilroy popped in a beautiful goal from far out the field to bring the score at half time to 3-6 to 3 points.

The second half proved more difficult and although they never let up on their workload the Iosagain girls found it difficult to get the scores against the wind.  Their defence was superb in this half as the St. Mary's girls tried time and time again to use their advantage of the wind.

The final score at 3-7 to 0-4 shows how few scores were managed in the second half but it doesnt show what a tight game it was and how tenacious the teams battled for the All Ireland Title.

Kilmacud Crokes girls played a huge part in this win but mention must be made of the Colaiste Iosagain No. 12, Jane Nic an Tuile from Ballinteer St. Johns who had an absolute blinder of a game.

Congratulations to you all.