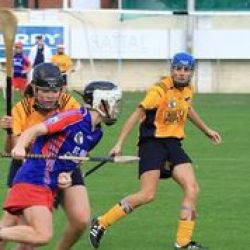 The 40th All Ireland Camogie 7s was held on Saturday 14th September 2013. The competition was a fantastic success on a beautiful, warm sunny day.

Kilmaley from Clare emerged as winners of the Cup competition. Another team from Clare, Scariff Ogonelloe, took home the Shield, while the Plate went north to County Down with Ballygalget. But it's not all about the winners. Teams from 22 counties enjoyed a marvellous day of action and camaraderie with camogie people that they would otherwise rarely meet.

Click 'Read More' to see details of all competitions, including the winners of the Player of the Competition, the winner of the Wall Ball Competion and the winner of the Poc Fada. You can also see a slide show of great shots from the action on the day. Thanks to Stephen Dagg for these.

Kilmaley from Clare are the 2013 Cup Champions!

On the road to the final, they played three group games against Clonduff of Down, St Vincent’s of Dublin (1-6 to 1-4) and St Ibar’s/Shelmalier of Wexford (losing 1-4 to 0-3). In the quarter final they beat Moycarkey Borris of Tipperary with the semi final and final being rematches of their group games where they beat St Vincent’s (3-5 to 0-1) in the semi.

In the final they met St Ibar’s/Shelmalier of Wexford who had overcome Liatroim Fontenoys of Down (5-6 to 1-10) after extra time in the quarter final and Newmarket on Fergus of Clare in the semi final (6-9 to 3-9).

However, Kilmaley got stronger as the day went on and having been beaten in the group stages by St Ibar’s Shelmalier, they managed a 2 point win in an exciting final, outscoring Ibar’s by 3-5 to 1-9.

Scariff Ogonelloe played Ballycran of Down; Portobello of Dublin and Kilmessan B of Meath in the group stages and beat St Joseph’s, Armagh in the quarter final. In the semi final, they beat Eglish of Tyrone (5-5 to 4-4).

Four Roads beat Kickhams Creggan of Antrim and Na Fianna of Dublin in the group. They drew with Portumna of Galway, 2-8 a piece but Four Roads topped the group on score difference. In a tight semi final, they beat Kilmessan A of Meath 2-6 to 2-3.

The beaten semi finalists were Knockananna of Wicklow and Cullyhanna of Armagh.

Daintree Paper Camogie Bride of the Year Winner will be announced in October. For our 40th anniversary, all teams were presented with a Daintree framed photo of their team as a momento of the day. Please support our sponsor.

The additional fun activities – the Bungee Run and Gladiator Challenge – also added to the occasion, as did the brilliant young Comhaltas musicians who performed in the function room during the meals.

Thanks to all the teams who participated. Many of you told us you had a great day and benefitted from the competition in one way or another.

To all the referees who volunteered, we really appreciate it, thank you very much.

Thanks a million to all the club members who help in many ways. We are hugely indebted to you all.

We hope to see you all again next year for another great day of club camogie!

Saturday 18th January, 2020
Following a meeting of the Camogie Association's Ard Chomhairle it has been decided that...
Read more …