Our Girls Qualify for Feile Final! 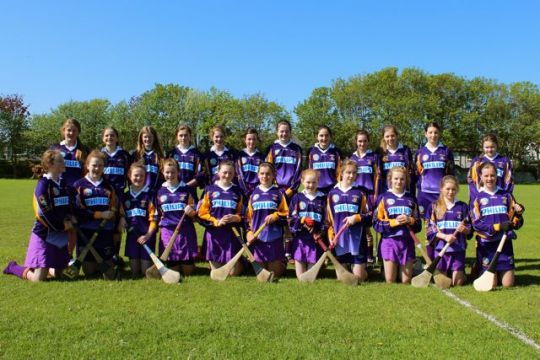 Kilmacud Crokes Camogie qualified for the Division B Féile final tomorrow, May 27, in Parnell Park against Good Counsel after a tough day’s camogie at Cuala club.

Summer arrived at long last, so the weather was hot and sunny all day with a cooling breeze. First opponents were local rivals Naomh Olaf’s, who spent the first 2 minutes with some strong attacking that yielded nothing. Crokes were solid in defence, with Niamh Tallon the standout defender in the early skirmishes. After that, KIlmacud broke and took the game to Olaf’s. After 3 minutes Maedhbh Gallagher opened the account with a great goal from about 20m. Cutting to her right between two defenders, she sent in a great shot that looked destined for a point but dropped in under the crossbar at the last moment. Further pressure resulted in a goal for Julia Buckley who followed up on the 10 minute mark with a point from a free about 30 meters out. Naomh Olaf’s lifted their game and responded quickly with a goal of their own. After that the game was end-to-end with some great defending from both side, but no further scores before half-time.

Second half saw Olaf’s win a free straight at the start. Again strong defending required with Eadaoin Herlihy clearing to touch on the right, before Maria Eirin O’Hurley won the ball in the centre and sent it soaring into the Olaf’s half. Two quick gaols midway through the half sealed the win. Julia Buckley scored again, and almost immediately sent a second goal bound shot from distance that the Olaf’s goalkeeper only parried, for Maedhbh Gallagher to pounce and sent into the back of the net. With 3 minutes to go, Hannah Cosgrave won a free on the left about 20 meters out from which Julia scored the last point. Naomh Olaf’s tried hard to get back in the game, but without any further scores as Crokes defended in earnest, with Orna McLoughllin and Maria Eirin O’Hurley repeatedly denying them any clear scoring opportunities.

Crokes held hosts Cuala scoreless in the first half while scoring three points themselves, despite the best efforts of the woodwork to deny them.  All the early pressure was from Crokes but it took until the sixth minute for Hannah Cosgrave opened the scoring from play close in after Julia Buckley went close with a free from 35 metres that came back off the high upright.  Shortly afterwards Maedhbh Gallagher was denied a goal by the post, and in the follow-up Aoibheann MacGiolla Ríogh sent an angled shot crashing back off the crossbar. Midway through the half Julia Buckley settled nerves with a brace of points in quick succession. The first came from a free about 30m out – after Hannah Cosgrave was fouled – and then followed up with a beautiful point from play near the left touchline. Cuala’s response won a free 40m out, which was sent into the Crokes goal area. Crokes’ defence stood firm with Maria Eirin O’Hurley  clearing the lines. The half finished with Crokes in control, with repeated attacks that had the hosts defence stretched. In the last play, a 45 into the area from Crokes almost resulted in a goal, and the half finished with the resulting puck out.

Cuala scored a point early in the second half before points from Julia Buckley, Maedhbh Gallagher and Charlotte O’Farrell stretched Crokes’ lead, with Aoife Power featuring in the set up for two of them. There was some great camogie on display from both teams in this half, in particular in the centre of the park from the seemingly tireless trio of Caoileann NíCheallaigh, captain Jennifer Meagher and Charlotte O’Farrell. Crokes had to endure sustained pressure from Cuala for the final few minutes of the game, but a determined defence stood firm and denied Cuala from getting a result despite conceding a late consolation goal.

Job done with a semi final place secured, Kilmacud took the opportunity to make wholesale changes and ensure everyone in the squad got to play their part against a Good Counsel team who looked determined to win top-spot in the table by playing their best players.

Despite some spirited play from Kilmacud, Good Counsel kept the scoreboard ticking over  with 3 points from 45’s in the first 10 minutes. Crokes battled hard with Eimear Hickey and Aoibheann MacGiolla Ríogh combining well during one good spell of Kilmacud pressure up in the opposition’s half. The pressure though from Good Counsel was relentless, and they managed to add 3 goals and a point before half time despite some resolute defending from Aoife Brady and Alison Berkery.

Aoife Doran scored a cracking first goal for Kilmacud almost immediately after the restart, and after Good Counsel replied with a brace of their own, another good spell of play from Kilmacud resulted with a goal from Aoibheann MacGiolla Ríogh hitting through a forest of players in the area from about 15 meters. Good Counsel however, finished the game as they’d started with a further point and goal.

Kilmacud found themselves behind by a point at half time after a tense first half of this semi-final. Early Faughs pressure resulted in their first point from a 45. Crokes almost scored at the other end before Faughs doubled their tally from another 45 in the fourth minute. In the sixth minute Kilmacud put together a beautiful move which resulted in a goal. After some great defending they won a free out deep in their own half. A great inchange in midfield between Hannah Cosgrave and Charlotte O’Farrell ended with the latter sending a shot from distance just wide. From the puck out, Maedhbh Gallagher managed to score with a shot that somehow managed to make its way through a crowed goal area. Kilmacud continued to have their share of the play in an evenly contested game. Both sides missed chances with a couple of wides each, before Faughs managed to equalise with a long range point from play a few minutes later. Faughs finished the half stronger and managed to gain a half time lead with a fourth after a free into the Croke’s goal area just before half time.

Klmacud were well fired up for the second half after a rousing and encouraging half time talk from coaches David Buckley and Mícheál O’Ceallaghaigh. Emer O’Rafferty grabbed a quick goal, and Julia Buckley added a point after going close with a 45. Faughs fight-back was stifled by Kilmacud, with Aoife Power, Maria Eirin O’Hurley and Orna McLoughlin instrumental in giving them no opportunity to reply with a score.  Kilmacud cut loose with some lovely flowing attacking moves. Maedhbh added a point after great work from Hannah & Julia, and then a similar move saw Caoileann pick out Maedhbh, who found Hannah for another point. Emer O’Rafferty added a goal midway through the half after which Faughs got their goal. The remaining nine minutes were tense and hard-fought, and both sides made it hard for the other to create chances. There were a couple of wides each, but no more scores before the referee blew for full-time to the delight of the Kilmacud team and great band of supporters who encouraged them all day.

Kilmacud qualified for the final and a chance for revenge for the earlier defeat by Good Counsel, who qualified after defeating Plunketts.