For some years, this webmaster has been seeking an input from various Kilmacud Crokes exiles who may be far away from Stillorgan for variable lengths of time.  Sometimes they are undertaking personal, exploratory journeys; other times their absences may be due to economic necessity.  For whatever reason, the migration of some players, and other members, to all parts of the world is a fact of life, something that is reinforced by a geographical analysis of our web-site visitor statistics.  Although they may be physically distant we know their hearts are never too far removed from their home club and their families ..... and vice versa!

It gives me great pleasure, therefore, to kick off, what will hopefully be a regular feature, with  a wonderfully written piece by young Cillian Caffrey.  "Cill" comes from the popular and sports-mad Caffrey family in Lakelands.  He is pictured on the left in the photo below, alongside his father, Joe, and brother Ronan in New York.  All of the family have been heavily involved in Kilmacud Crokes for many years so who better than young "Cafo" to launch the series?  His writing style is most engaging, humorous and refreshingly open and personal.  He clearly has great writing ability and I, for one, look forward to sharing in his voyage over the coming months.  It is fitting that the series kicks off on a weekend when the new club membership structure is published (see here), with a new 'Country/Overseas' option included.  It is also fitting that Cill's excellent phrasing and grammar is revealed on a weekend when the dropping of the apostrophe from UK road signs is brewing up a storm.  The future of the English language is still in safe hands!

Scroll down to read the first installment - hope you enjoy it and I also hope it will inspire our members in other locations to occasionally submit their "home thoughts from abroad" via the email option at the bottom of this page!  This, and other musings by Cillian, can also be found on his New York blog so be sure to check it out.  Well done Cillian, keep up the good work! 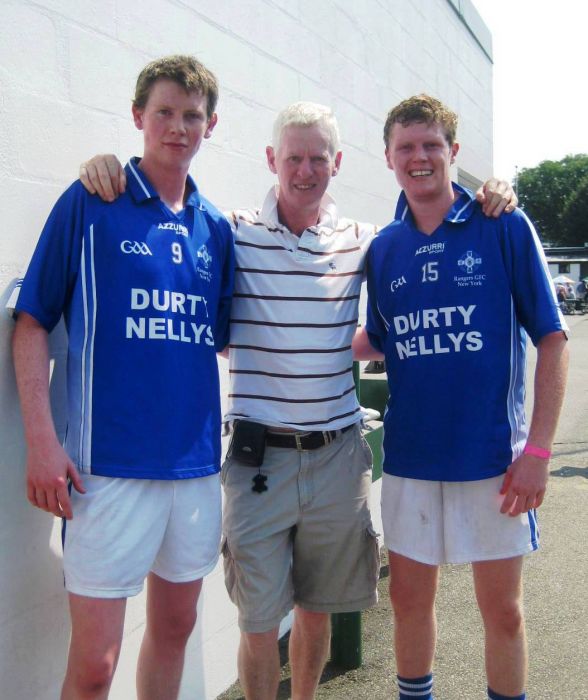 The Far Away Hills'¦

I'm not sure if I could take another week of this. I put up my hood, stuff my hands as far down into my pockets as they will go, and I brace myself. I step out onto West 38th street and immediately the cold air takes my breath away. It's a late January evening and the New York winter is flexing its frosty muscles. A short trudge to the subway has been transformed into my own epic battle against the elements. The pathways are slippery slabs of ice that slow even the most experienced city stroller to a tentative crawl. My usually rosy cheeks have immediately taken on a bluey-purple complexion as the bitter wind whips and stings my face, and an icy sludge cracks and spits under my feet. The bright lights and the roar of Times Square, which usually provide such wonder and joy, are little consolation as I count down the seconds until I can embrace the heavy warmth of the subway. I finally reach my train and bask in the wonderful body heat of the packed tram. Heading back towards Brooklyn, my mind wanders and I think of home. As tortuous as this winter is (the coldest in the last few years), I think back to this time last year when I was enduring a different kind of torture: pre-season football training.

It's a strange feeling not being involved in pre-season training for Kilmacud Crokes this year; it's a feeling of guilt almost. For as many years as I can remember, the months of January and February have consisted of managers such as Gerry Greene, Pat Duggan, or Marcus O'Buachalla, attempting to expel the demons that resided within us after our excessive holiday exploits, and get us fit for the year ahead. Every extra chocolate bar or packet of crisps that we ate over Christmas was tainted with the knowledge that it would be paid for handsomely a mere two weeks later in training. The first week in January was always a harrowing time, awaiting the dreaded call from the manager with the time and place for the first training session of the year, usually the muddy back pitch of Silverpark on a Saturday morning. When that day all too quickly arrived, the atmosphere of laughing and joking around in the dressing room, with lads you hadn't seen in a while, quickly shifted to devastation as the manager smugly described the horror that lay in store for us. Inevitably the rain would start just in time to welcome us out onto the pitch.

Vomit-inducing sprints, distance runs, burpies, squats, press ups, and sit ups were our staple diet, as the managers would look on in disbelief at the ghosts of former athletes that they saw before them. A bag of footballs would always appear pitch side, but would remain unopened the whole time, taunting us. From struggling around a dimly lit Pairc de Burca to scaling the heights of Killiney Hill, each venue seemed to hold the same chilling characteristics. The rain, the wind, the mud, the cold, the soggy gloves, the drenched boots, the frozen cheeks, the blue lips, and the agony of 'only twenty more minutes to go lads' (which really meant thirty). Each gut-busting sprint would be completed with a desperate prayer that pity would be taken on us, and that the next one would be the last. When a session finally ended, the brief feeling of relief would soon be replaced with depression and the distressing reality that another potentially more gruesome event was only another day away.

As tough and as painful as those pre-season sessions were, they were a tormenting tradition that I've always had in my life and that I grew to enjoy in a strange way, even if I cursed them at the time. My brother Ronan, who is almost a New York native at this stage, agrees and even speaks fondly of the countless times he was run into the hallowed Glenalbyn turf. There is something about going through it all as part of a team, something about the satisfaction when the final run is done, something about knowing that you've pushed yourself to the limit, and something about the collective cloud of steam that rises from an exhausted team huddle, that can't be replicated.

That's not to say that I haven't tried to create my own pre-season ritual in my local Bushwick gym. Donning a pair of embarrassingly small Kilmacud Crokes shorts, I cut a pale and probably amusing figure, jogging on the treadmill amongst my effortlessly cool Black and Puerto Rican neighbours. However, I've come up against one major issue. Apart from the obvious problem of the minus15 degree temperatures outside, the key issue is sourcing my motivation. I've realised that my motivation to get through pre-season came primarily from my desire to beat the Barry Brennan's and Chris Carolan's of this world and maintain bragging rights, or from the threats of violence from my manager. Threats of violence from the locals at the gym just don't have the same effect on me, and are probably a serious cause for concern.

In any case, pre-season training is one thing I never thought that I would miss. I guess you don't know what you've got 'til it's gone. So, as I sit in my warm Brooklyn apartment, with my feet up, a takeaway in hand, and the American football on, I spare a thought for all of my Kilmacud Crokes compatriots who are in the midst of performing this yearly ritual - the lucky things. If I could be there with them right now I would'¦probably.

By John Harrington Defending Munster Football Champions, Tipperary, have been handed a tough...