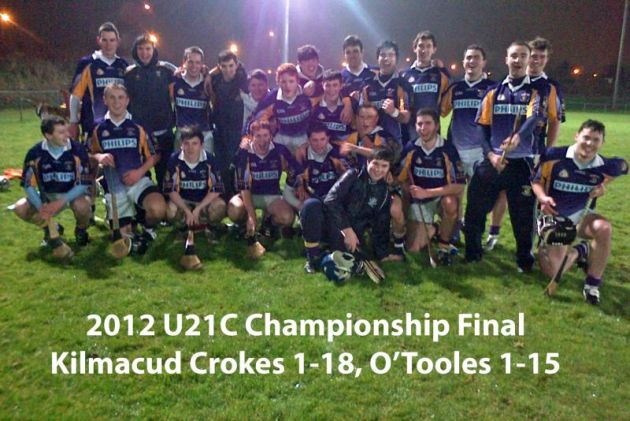 Crokes opened up strongly & roared into the lead with Sean McGrath opening his account with a point from a converted free and a goal from Jude Sweeney after 4 minutes. O'Tooles then came into the game and the rest of the half was a tight affair with both sides sharing 5 points a piece  At half time, Crokes led 1-6 to 5 points.

O'Tooles were the better team in the second half and out scored Crokes 9 points to 5 points. After 20 minutes in the half, O'Tooles went into the lead for the first time, but Crokes quickly drew level, but O'Tooles then went into a two point lead, Crokes dug deep and got the final two scores of the half to draw level.  When the whistle sounded, the score was Crokes 1-11 to O'Toole's 14 points.

As the rain came in, extra time started and Crokes started as they finished the second half and open up a 2 point lead but O'Tooles pulled one back leaving one point in it at the break.  Crokes extended their lead straight from the throw in.  Then O'Tooles goaled to go into the lead, but this was their last score of he game and Crokes struck four unanswered points to win by three points.  At the final whistle, Crokes led 1-18 to 1-15.

A fine sporting game, with high quality hurling from both sides.

Antrim hurler, Ciarán Clarke, has been voted GAA.ie Hurler of the Week. The Ballycastle man...

GAA.ie Hurling Team of the Week

So, who has made the GAA.ie Hurling Team of the Week? Remember, players may be picked in...