Five “halves” could not separate two teams who gave it their all at Bray on Saturday evening 22nd January 2011 in the final of the 2010 Leinster 3G Under 16 Tournament. 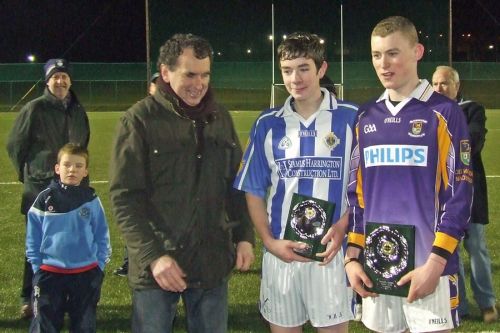 It was a cool but pleasant evening as the lights were switched on and Kilmacud Crokes and Ballyboden took the field under the control of renowned inter county referee Dickie Murphy.  This was a super game on Bray’s magnificent artificial surface.  Crokes had the better of the first half and led 1-6 to 1-2 at its conclusion despite having been 1-2 to 0-4 in arrears after fifteen minutes.

Boden had their purple patch in the second half when they scored a point, a goal and another goal, without reply, to forge three points ahead.  This might have knocked a lesser team but for the second time in two weeks the Kilmacud boys clawed their way back and it took two late minors, from frees, for Ballyboden to finish regulation time level at 1-11 to 3-5.

Extra time consisted of seven minutes each half.  At the break it was 2-13 to 3-8 in favour of Crokes.  Ballyboden scored the only two points of the second period and it was again all square at 2-13 to 3-10.  There was debate as to how to conclude with one suggestion being three 65’s each side to decide.  This found little favour and a “winner take all” further five minutes was agreed.  While each side had chances, tired limbs yielded no score and after 79 minutes of hurling there was nothing between two gallant teams and the trophy was shared.

Many thanks to all involved in organising a superb tournament in particular Lester Ryan of the Leinster Council and John Henderson from the host club Bray Emmets.

For the Ballyboden view see HERE or click on the image below!

Brian Cody has stepped down as Kilkenny senior hurling team manager. Since being appointed in...

GAA.ie Hurler of the Week nominees