Kilmacud Crokes captured the Dublin Intermediate Hurling Championship in historical fashion at Parnell Park on Sunday 9th October 2011.  As a result, in 2012, for the first time ever the club will have two senior teams competing in the Dublin Championship (senior A and senior B).  On the previous occasion we had two senior league teams (1994), the second team took part in the intermediate championship. 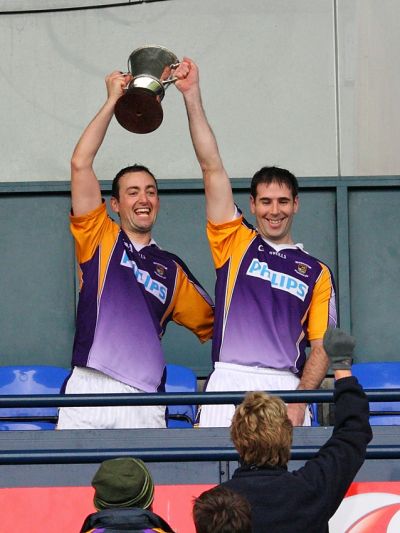 This was a great achievement for a wonderful group of players and a team performance from start to finish.  It was great to see the jubilation when Damo and Dave raised the cup.

Alex Pilkington opened the scoring after three minutes when he cut through the Barrog defence and drove home an unstoppable shot to the corner of the net.  This appeared to be the start needed but the scores were difficult to come by in the following fifteen minutes.  Barrog replied with three well taken points to level the game but in the ten minutes remaining Crokes hit a purple patch.  Points from Conor Sheehan and Alan Tiernan as well as 1-1 from the impressive Donal McGovern gave us a half-time lead of 2-7 to 0-5.

Barrog started brightly on the resumption and shot two early points to reduce the lead to seven.  They will rue a missed penalty and another great opportunity that just went wide of the post.  Had they taken those chances things could have been different at the end but an incredible work rate by all the Crokes players weathered the storm and kept the ball moving to the forwards.  Donal and Alex finished with great goals to give Crokes a memorable victory.

I’m finding it very difficult to single out any individual player for special mention.  This was a total team effort but the performances of Damien Byrne Aidan McCarthy, Brian Hanamy, Niall Lillis, Donal McGovern and Hugh Gannon especially in the last twenty minutes were outstanding.  Best for a gallant Naomh Barrog side were were Niall Ring, Paul Garbutt, Hugh McGirr, Eoghan Costello and Dean Flood

Congratulations to all concerned and a special thanks to the Hurling Committee. Dr Tiernan Murray, Richie Stakelum and Niall Corcoran.

The March book in the GAA Museum Book Club is 'The Hurlers' by Paul Rouse. The book tells the...

Limerick’s status as the current benchmark in hurling excellence has been underlined with their...

By John Harrington GAA Ard Stiúrthóir, Tom Ryan, believes it is time to give serious...