Crokes began their Minor A championship campaign with a convincing win over Faughs at a windy Silver Park on Sunday, 15th September. The Tymon side had upgraded from Division Two for the championship and were disadvantaged by not have their county minor player, Chris Bennett, available due to injury. Crokes started playing against the wind and immediately laid down a marker of their serious intent. Within a minute of the start Seán Keating had the ball in the net after a neat pass from Mark O’Loughlin. This was immediately followed up from the puck-out with a great point by Mark McCallion. Keeping up the pressure Crokes missed a number of chances but their superiority in general play forced a number of frees and these were converted flawlessly by Seán Keating and Cian Mac Gabhann. Mikey O’Dywer, Ciarán McIntyre and Dara Ó Gallchobhair also pitched in with points. After twenty minutes Mark O’Loughlin struck for Crokes second goal and another goal by Seán Keating a few minutes later left the home side 3-09 to a single point ahead at half-time.

The game being over as a contest the pace of play dipped considerably in the second half but Crokes maintained their grip on the game with the defence in particular completely in control. Faughs did manage to score a goal from a well-taken free midway through but Crokes replied with points from Ciarán McIntyre, Cian Mac Gabhann, Dara Ó Gallchobhair and Alex Considine, while Mark O’Loughlin got in for his second goal of the game. The final score was a resounding 4-20 to 1-03.

This was a great confidence-building start to the championship but the lads know that sterner tests are in store for them. The next match is an away fixture against Vincent’s in two weeks time and will surely be a difficult assignment.

Among the large attendance at the Minor A match today were members of the Milwaukee Hurling Club; in Ireland for the Gathering. The team took in the match following a coaching session with Crokes' Niall Corcoran. We wish them well during their stay! 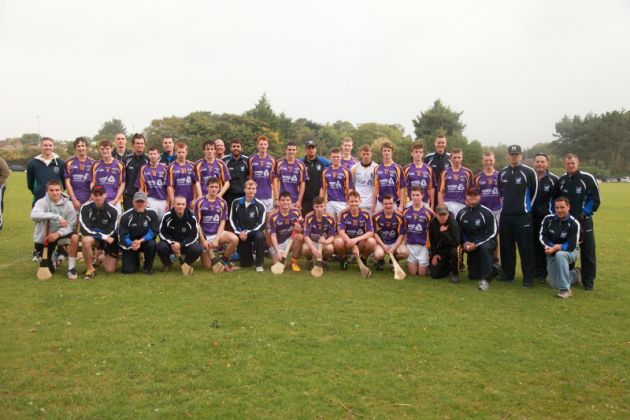 The Minor team pose with the Milwaukee Hurling Club

All Ireland SHC Quarter-Final Galway 2-19 Cork 1-21 Galway will face Limerick in the All-Ireland...

All Ireland SHC QF: Clare finish with a flourish