First ever Sevens Victory for Crokes 2012 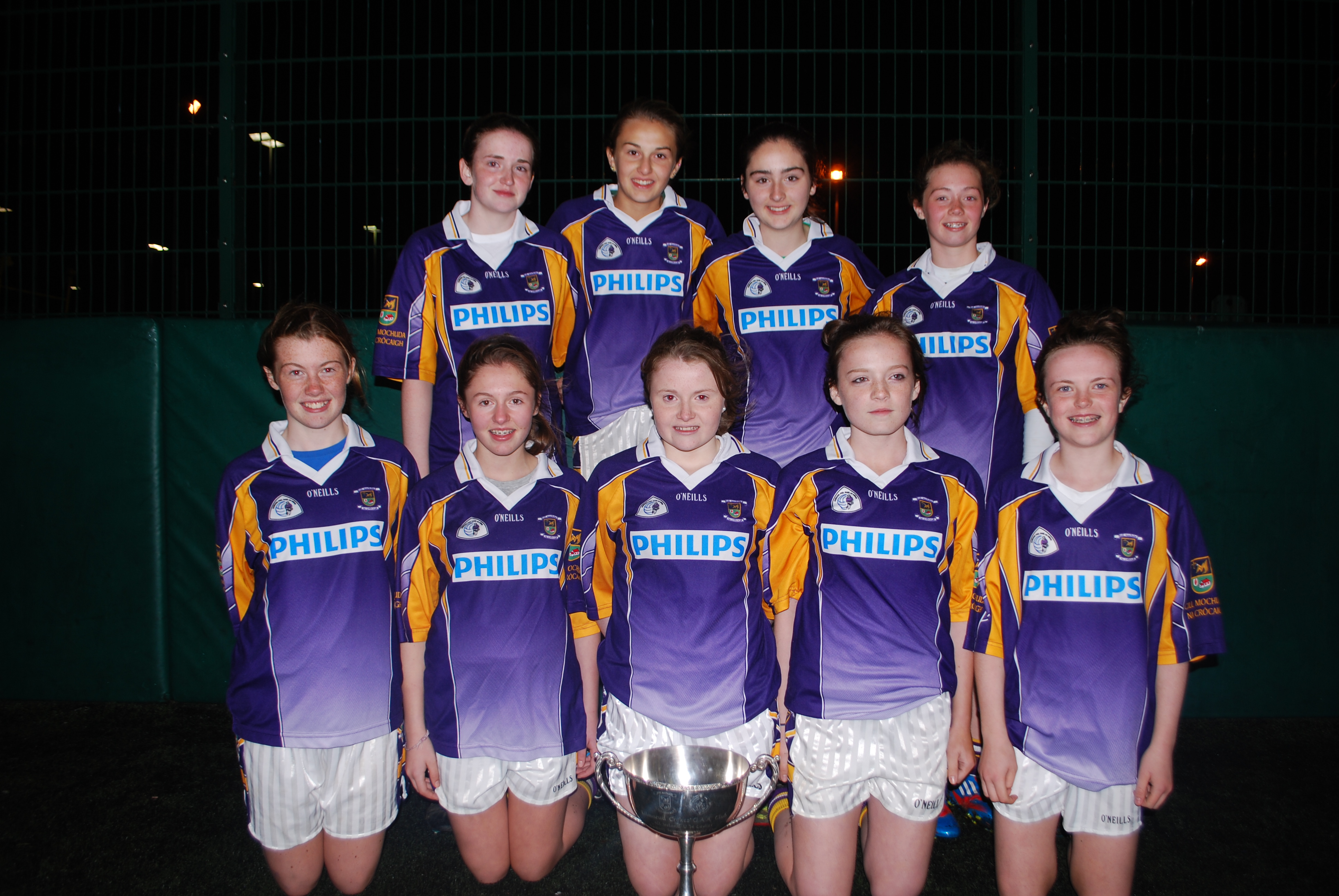 Preparations for the competition were put on hold as we had a championship semi final to win last Sunday. With that achieved we set about trying to teach the fundamentals of sevens football to the girls. We are very grateful to Paraic McDonald (Club Coach) who took the final training session before Saturday which proved invaluable to us. We then had the very difficult choice of picking a panel of 10 girls to represent us. From a management point of view this was not easy and we would like to thank especially all the girls who did not make the panel for Saturday for the manner in which they accepted the selection and supported the girls chosen.

The first group match started the way it was to continue for the rest of the day, 2 goals down after 30 seconds to Moyle Rovers (Tipperary). We managed to haul ourselves back into it by half time with goals from Mia then with Julia and Robyn taking over in midfield and great defensive work from Ciara, we won well in the end. The second group game was against Carryduff and was the only match of the day where we started like a whirlwind and had the match in the bag at half time. All credit to a brave Carryduff (Down) who fought back and outscored us in the second half. For this match we deployed Katie as goalkeeper/sweeper and this change worked a treat for the rest of the day. We needed to win our final group match to top the group and avoid a knock out match against Kilmurray Ibrickane (Clare) who had topped the group beside us and looked an exceptional team. This was achieved in a hard fought match against Moate (Westmeath) although we had not seen the last of the Clare team!

The knockout stage began against Bryansford (Down) and the girls won well in the end despite a tough challenge. The girls really stepped up to mark, especially Muireann and Ali at the back, and it was at this stage that we realised that it would take a good team to beat us.

On to Glenalbyn for the quarter final amid growing excitement and a heart stopping match against Lurgan (Cavan). The usual slow start and the concession of three goals had us reeling but the girls reacted brilliantly and a great insurance point from Kim and another few goals from Mia and Robyn sealed an 8-2 to 7-2 win.

The semi final saw us pitted against the All Ireland Feile winners Naomh Ciaran (Offaly). After a cracker of a game which included a penalty scored by Julia, one saved by Katie, a fantastic goal and point from the brave Aoife Doran and a rearguard action for the last two minutes, marshalled by Muireann, saw us emerge victors by 2 points. From the other pitch the news came through that Kilmurray Ibrickane had beaten our old Dublin rivals Foxrock Cabinteely by a point to set up a Dublin/Clare final.

News that the final was to be 15 minutes each way was met by groans from the girls who were out on their feet. Little did they realise that they would need every second of it to emerge victorious. The usual concession of a flurry of goals at the start was not met with panic from management as before (we were getting used to it!). By half-time we had dragged ourselves back into the game and only trailed by 3 points-5-3 to 4-3 thanks in no small part to the defensive work of Ali.

All the opposition scores coming from the boot of the player of the tournament, the exceptional Chloe Moloney. The second half was a titanic struggle with Aoife Flynn popping up to get the killer goal for Crokes a minute from the end. A magnificent point by Muireann and a goal with the last kick of the match from Mia put gloss on the scoreline-Kilmacud Crokes 7-8 Kilmurray Ibrickane 6-5. This set the scene for joyous celebrations from the players, management, parents and brilliant club support.

In our wildest dreams we never thought that we would end the day as the Kilmacud Crokes All-Ireland Sevens Champions 2012. The management of the team would like to thank all the 7's committee for their incredible work in organising this event, the brilliant support from our parents, with special mention to David Buckley for his tactical nous and Odette for the buns!, and all the club members especially for semi and final. Oh yeah, nearly forgot the 10 girls who played their hearts out, thank you!

Here’s how and where you can watch the 2022 currentaccount.ie All-Ireland Club Finals

THE scene is set for the 2022 currentaccount.ie All-Ireland Club Championship Finals.