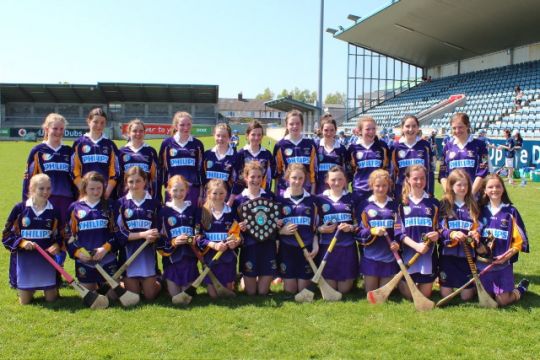 The Kilmacud 2012 Féile Camogie team made history today, Sunday 27th May, with a first ever camogie Féile victory for the club at Parnell Park. After disappointment in the final for last year’s team – some of whom were playing again today - this year’s team made amends with a spirited team performance to overcome the Good Counsel team that had beaten them in the pool game the previous day. Parnell Park was the venue on another hot sunny May day, with conditions perfect for a great day’s camogie.

Worryingly, the game started really well for Good Counsel who dominated the opening exchanges, when the slíothár was rarely outside the Kilmacud half. Rachel Fleming was busy in goal, but commanded the goal area with authority as she has done throughout the Féile tournament. However, all that pressure eventually bore fruit and Good Counsel were rewarded with a fine goal to open the scoring. They continued to press, possibly sensing a big score like the previous day. Kilmacud were having none of it, and after a few more minutes camped in their own half, they started to play themselves back into this game.

Captain Jennifer Meagher started to contain the influential number 8 for Good Counsel, and others around her followed suit to turn this game. On 14 minutes Emer O’Rafferty showed signs of Kilmacud’s intent, with a great looping run and solo towards the Good Counsel goal, which culminated in a great shot and equally excellent save from the goal keeper. From the resulting 45, Julia Buckley showed steady nerve to open the scoring for Kilmacud with a point. This lifted the team, who started to dominate the mid pitch battles, with some wonderful flowing camogie. Charlotte O’Farrell gave Kilmacud the lead with a great goal a couple of minutes later after a fine build-up involving Julia and Emer O’Rafferty. Good Counsel looked stunned, and Kilmacud created a number of chances in the minutes upto half-time, which they were unlucky not to convert.  They almost extended the lead just before half-time, when first Julia, then Maedhbh Gallagher, and finally Emer were crowded out by last-ditch desperate defending. Unable to get in a shot, Emer showed wonderful presence of mind to try to hand-pass into the goal, but the slíothár slipped agonisingly outside the right hand post. Half time! Kilmacud tails were up and Good Counsel looked rattled.

Encouraged throughout by their loyal – and very noisy – supporters, the Kilmacud team made a confident start to the second half. Good Counsel conceded an early free for a over-carrying violation near the centre line. Maria Eirin O’Hurley launched a great ball deep into their half and Maedhbh sent it on into the goal area but it was cleared. Good Counsel struck back, when after 5 minutes they regained the lead with a goal that followed quickly on a wide from a touchline cut. Undeterred, Crokes took the game back to Good Counsel, and were unlucky not to score a point when a shot from Hannah Cosgrave came back off the upright. Minutes later, Julia kicked narrowly wide before managing to break her marker on 8 minutes to score a great goal to restore a narrow lead.

Good Counsel responded strongly, and after a couple of wides from far out, managed to get an equalising point from about 20 meters out. The pace of the match was frenetic, but Kilmacud were not prepared to give up. With about 14 minutes gone, the move that would eventually settle this match was started when Crokes broke from defence and Aoife Power passed on to Caoileann NíCheallaigh. The long ball driven in was won by Julia who brilliantly slipped her marker, and after a short run drove the deciding goal into the roof of the net.

On 15 minutes, Aoibheann MacGiolla Ríogh substituted for Aoife Power who had given her all in the midfield battles. Both sides made forays into each other’s halves for the remainder of the game, but neither created any further scoring chances.  Saoirse Reade epitomised the Kilmacud spirit when she took a nasty looking crack of a hurl to the hand 2 minutes from time defending close in on her own goal, and insisted she wanted to play on. The referee blew for time with Kilmacud still battling for possession inside the Good Counsel half. Victory Kilmacud! 3-1 , 2-1.

Once the celebrations has settled somewhat, the Kilmacud team and supporters sportingly applauded their opponents in the medal ceremony. Then it was the turn of the captain Jennifer Meagher to lead her jubiliant team up the step to receive the winners’ trophy and medals, but only after Charlotte O’Farrell had to battle her way past her team mates to be the deserved recipient of the best player award.